Home / Our Blog / Changing the Narrative on Early Marriage

Changing the Narrative on Early Marriage

11.30 a.m. I was sitting in classroom 8-C when my younger brother came running to call me home. The groom’s family was here. They wanted an early wedding. My father wanted me to go home immediately.

My mother wanted me to wear a sari.

No one asked me what I wanted.

The next day I spoke to my class teacher. I told her I wanted to study. She discussed it with the principal.

Today, I am back at school. I am studying to take the board exam next year. I am to teach at my village school.

In states like Jharkhand (India), close to 40% of young girls are married before the age of 18.

Even though India has seen a dip in child/early marriage from 47% to 27% it still contributes to one-third of the world’s child brides. These reductions are primarily in the age group of 0-10 years, but adolescent girls still remain at high risk of early marriage.

The social conditioning impacts adolescent girls like Reena Kumari who have dreams. There is a high likelihood that she will be forced to marry when she reaches puberty. There is a 41.3% chance that she will face domestic violence and being too young will be unable to stand up against it. She will be given 96% of the household chores in her new home, and her mobility will be restricted further. Her young age doubles her chances of dying at childbirth. Moreover, there is a 96% chance that her brother will inherit all her father’s property.

Breakthrough’s work show that many of these situations can be overcome when a girl marries after the age of 18. She has better access to education and economic opportunities, increased sexual and reproductive rights, and improved decision-making abilities. She is also able to negotiate a gender-equitable position within her own family and potentially within her marital home.

Child/early marriage has many aspects and also requires a multi-faceted approach to address the issue. The need for convergence is high to achieve real and long-term changes in the social norms that sanction and/ or promote early marriages of girls.

‘Nation against Early Marriage’ is Breakthrough’s campaign on changing norms around early marriage, with mass media, intensive community development and leadership training initiatives in the Indian states of Bihar and Jharkhand in October, 2011. Since then, we have slowly and steadily built awareness on the issue of early marriage and its implications on young girls through a multi-stakeholder approach using the socio-ecological model. 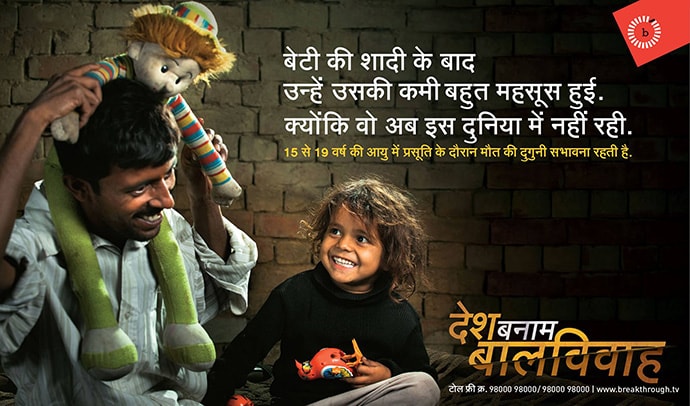 As we are aware, norm change requires addressing structural changes, too. We decided to continue working with the communities and build local capacities to demand for better infrastructure including education, health, skill-building, and strengthening existing structures.

In 2015, after the completion of phase 1 of our program, Breakthrough did a midline survey of our intervention and the following were the two key findings of this study:

As a part of the program, through a school-based intervention called Taroon Ki Toli (Gang of Stars), a cadre of adolescents learns their rights and has the agency to recognize and address different forms of violence they may face at home or in public places. There is a high probability of them facing a backlash without the adequate support from family and community. The existing systems, service delivery mechanisms and local NGO networks currently don’t provide the requisite safeguarding services. We realized that our program will be robust with an enabling ecosystem to provide ‘protection and prevention’ to ensure safety and security of adolescents. Therefore, we incorporated aspects of advocating for strengthening formal and informal response mechanisms right from GP (gram panchayat) level to State level, based on the state context and proposed government child protection mechanisms to create safer spaces in the community.

The last two years have shown us a positive impact of our work such as an increased awareness of communities on the importance of education for girls, to creating safer spaces for girls. A heartening result is the ownership the community has taken to the program. They are taking initiatives to improve school infrastructure, access to toilets, tackling alcoholism and ensuring safer mobility of girls from home to school. A sustained dialogue in communities and online spaces has enabled us to establish critical partnerships with organizations/agencies like the Government of Bihar and UNICEF to address child/ early marriage through a State-wide campaign.

Early marriage, rooted in gender and power inequities that marginalize girls and women within relationships and society, reinforced by social norms that promote and justify this practice, is a critical issue all over the world. The onslaught of perpetration, and/or threat of emotional, verbal, physical and sexual violence on adolescents as a result of this have become national and public priorities. It may be impossible to reach and convince everyone in a community, yet if enough people support the issue, the social norms that sanction this practice can gradually shift.

As Breakthrough continues to engage communities and families, especially fathers, in this dialogue, people are slowly realizing that preventing early marriage could be the biggest step in protecting their daughter’s life.