GLOBALWA.org / Our Blog / Banking on Women: Financing the Future of Economic Growth

Banking on Women: Financing the Future of Economic Growth 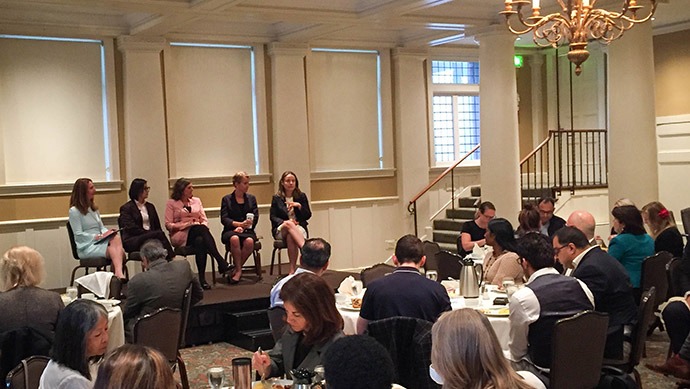 “Banking on Women” – a joint event, organized by Global Washington and the World Affairs Council, held at the Rainier Club on May 10, 2018. Photo: Andie Long/Global Washington.

“It’s really a no-brainer,” says Saara Romu, founder of Selkea, explaining the benefits of financial inclusion for women in global development. Not only does it increase countries’ GDP growth, but it improves the overall well-being of families and communities in developing countries.

Investing in women has repeatedly shown to be the fastest way to impact communities and increase ROI. For this reason, development organizations, the private sector, and policy makers are focusing on deliberate efforts to create access to financial markets for women.

A panel of distinguished women in the field of financial inclusion convened at the Rainier Club on May 10th through an event co-hosted by Global Washington and the World Affairs Council of Seattle.

The panelists agreed that inclusion of women is not just about the bottom line. They, and many in the development field, have said that the ability of women to have the same access to financial opportunities as men is a fundamental human right. Women deserve to earn, borrow and invest resources to meet financial obligations in their households, to grow their businesses and to save. However, the avenues for women to access financial services, especially in developing countries, have not always worked well for women.

What do we mean by “financial inclusion”?

The World Bank’s Findex survey, published every three years, measures access to financial services worldwide. The most recent report shows incredible advances for clients worldwide, thanks to new technologies and electronic services. Rural and hard-to-reach areas, once considered too expensive to serve, are now within reach digitally. Whereas women had to travel five hours to pay a bill, digital services and local bill-paying centers now save these previously lost hours.

However, determining equity of access to these services for women is an issue that continues to merit special attention. In Bangladesh and Jordan, the gender gap is around 30 percent, indicating that access for women continues to lag behind access rates for men. This drags down country GDP growth and affects Findex scores. When half the population is denied access to economic opportunities, the country suffers on a number of indicators measuring upward progress.

Banks sometimes argue they have been financially inclusive to women since they have no policy denying services to clients by gender.  But the panel argued that for truly equitable distribution of services to women, there needs to be a deliberate and thoughtful approach to reach this segmented market.

Murium Hadi of Karandaaz Digital, Pakistan, describes financial inclusion as creating choices for women that are affordable and create value in her life. Figuring out the value-add may differ depending on women’s unique situations, but financial institutions have found promising outcomes when they understand and can capitalize on this market.

What is being done? 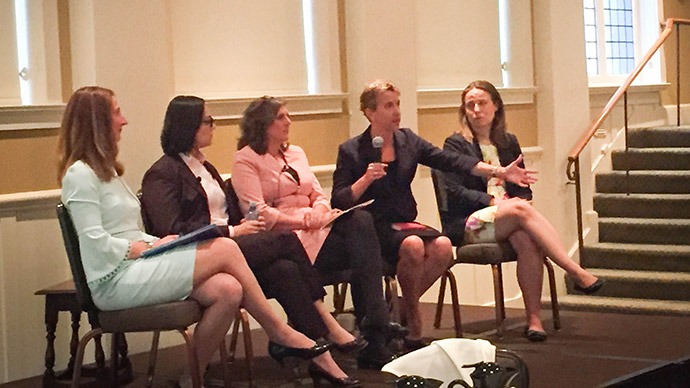 Public and private institutions that recognize the financial potential of untapped demographics, including women, have moved to be more inclusive. Greta Bull, CEO of Consultant Group to Assist the Poor (CGAP), has been involved in helping frame these issues since the early stages of microcredit and microfinance, and now mobile banking, in reaching last-mile users. Greta describes other new technologies and business models for financial services and bill-paying for large segments of the population that are exploding “head-spinningly-quickly” in parts of Africa and China.

Murium Hadi of Karandaaz Digital expanded on Bull’s comments, noting that mobile bill pay options and electronic payment platforms generally have the ability to enable large groups of people to “transcend poverty, illiteracy, education and class.”  She used as an example business women who have never been to an actual market, but who post pictures on Whatsapp to promote the products they sell from home.

In India, 80% of the population has a bank account, a result of a government push to create inclusive services built on state infrastructure. Though many of these accounts go dormant, this has created an ecosystem for organizations such as Google, Amazon, Facebook and a plethora of Chinese companies to expand business opportunities, making India a market to watch.

Kari Dohn Decker with JPMorgan Chase’s Global Philanthropic Strategy focuses on holistic financial health and asset building, and incentivizing and piloting new platforms and technologies. The program’s largest global effort ($400 million in five years) is to build technical skills and opportunities that “lead to upward trajectory” for poor populations globally. Though JPMorgan Chase regularly funds grants directed at women’s empowerment, the organization has changed its funding model to now have a more intentional focus on women. This has meant hiring teams reflective of the target demographic, building on knowledge of local language and cultural sensitivities, then building technical skills within these local teams.

What is yet to be done?

Despite advances in technology and a renewed commitment from organizations and businesses to serve women, challenges persist. Decker pointed out that many early-stage, segmented startups lack access to capital. Hadi agreed there is still room to figure out what makes commercial sense for this economically active but low-income segment of women. She noted too that without a single repository of data on populations already served, organizations are at risk of repeating failed attempts or missing entire swaths of people in need.

In the DRC, women are not legally allowed to own a bank account or run a business without permission from their husbands, said Bull. And yet, women’s success in Village Savings and Loan groups proves their reliability.

Haid agreed. “The more you talk about something, the easier it becomes to adapt and adopt,” she said. “But until the message is repeated on a loop, that cultural norm we cannot address.”

Beyond encouraging conversations around gender norms, Saara urges more investment and support for women’s networks to empower women to be advocates for themselves; to have the ability to communicate with their communities, and then to present their specific demands to policy makers.

Kristen Dailey, Global Washington’s executive director summed up the conversation by saying that reaching true financial inclusion for women will inevitably involve both high-tech innovations to create services that are accessible to women, as well as low-tech solutions, such as person-to-person contact, to create conversations that help change social norms.

Coupled with a robust network (such as Global Washington) sharing successes and failures, time, and likely some help from social media, women who were once isolated from a vast array of ideas and services, will become connected.