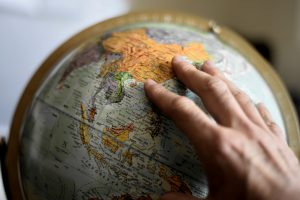 Living in a state as highly dependent on international trade as ours, Washingtonians are well-aware of the importance of maintaining good relations with our global neighbors. Not only is it a smart thing to do economically, it’s also the right thing to do.

At the company’s annual shareholders meeting, Starbucks’ CEO Howard Schultz noted, “Not every decision in business is an economic one.” Schultz reinforced that Starbucks’ social mission is especially important at “a time when hate and violence, both at home and abroad, threaten our shared values.”

Global Washington members share this vision of remaining true to our highest values in a world that is increasingly interconnected and interdependent.

“Even when we put a premium on taking care of needs at home, the United States can’t opt out of the world,” said Oxfam America’s policy and advocacy manager, David Saldivar.

Despite sometimes considerable differences in world views, we recognize our shared humanity and are united in the belief that where you are born should not dictate your life’s opportunities.

“As an immigrant and as a CEO, I’ve both experienced and seen the positive impact that immigration has on our company, for the country, and for the world,” said Microsoft’s CEO, Satya Nadella

University of Washington president, Ana Mari Cauce similarly reflected on her immigrant experience and how it shaped her values:

“When I arrived to this country in 1959 it was as a political refugee from Cuba. I then became an immigrant on a ‘green card’ and fifteen years later, a U.S. citizen proud to commit to the values that have made this country great…”

The University of Washington, one of the oldest universities on the West Coast, is the second largest source of college volunteers to the Peace Corps. And not only do Washington state colleges send young people abroad, they also enroll thousands of international students. In 2014, the UW welcomed 7,300 students from other countries. Similarly, Seattle University’s international student program includes 865 students from 51 countries.

As development practitioners, Global Washington members are acutely aware of our interconnectedness. When Bill Gates met with President Trump in Washington, D.C., in March, according to a statement from The Bill and Melinda Gates Foundation, he highlighted the importance of foreign aid:

“Foreign aid protects Americans, strengthens markets and saves lives. It’s one of the best returns on investment in government, and leads to a more stable and safe world.”

Today the world faces its largest humanitarian crisis since the founding of the United Nations, with more than 20 million people across four countries currently at risk of starvation and famine.  Now is not the time to pull back from global engagement.

“[F]or the last three decades, successive Republican and Democratic administrations have funded 28 percent of global humanitarian responses worldwide with just one cent of every taxpayer dollar,” wrote Neal Keny-Guyer, Mercy Corps’ CEO, in an email. “Our commitments have made the world more equal and prosperous, helping millions of people lift themselves out of poverty and find dignity even amidst disaster.

Richard Stearns, president of World Vision, also believes that our country continues to have an important role to play on the national stage:

“I believe America has as much to contribute to the world as it ever has in history,” Stearns said. “We have the chance to remind people in their worst moments what’s best about us as a nation. We can show our greatness by setting an example for the rest of the world in our compassion and respect for human rights.”

We believe in building global alliances with businesses, governments, and civil society to effect lasting change.

We believe in democracy and creating a healthier, more prosperous, and equitable world.

We believe in a Global Washington.

READ MORE statements from our members about the importance of remaining globally engaged: