On Friday, March 20, 2015, Global Washington partnered with Seattle International Foundation to host a business roundtable with Transparency International’s Regional Director for the Americas, Alejandro Salas. In Russell Investments’ downtown Seattle headquarters with a backdrop of Elliot Bay, leaders from six global companies discussed corruption, one of the biggest issues facing organizations across both the private and public sectors. 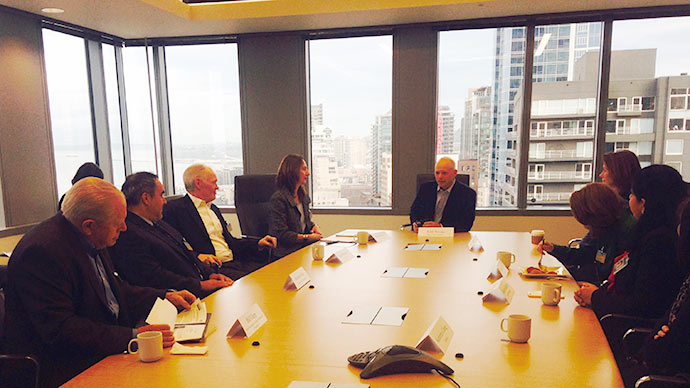 Following three Seattle-based groups making Ethisphere’s 2015 list of the World’s Most Ethical Companies, the discussion with Salas was timely. Seattle is home to a number of corporations known for their progressive business practices. This breakfast brought together leaders from Russell Investments, Holland America Line, Expedia, Costco, Carrix and Starbucks.

The conversation began with discussion of the principal costs of corruption that affect business and civic leaders alike, including environmental damage, weakened social fabric, bribery and a lower quality of life. These costs, like so many challenges in the developing world, are not borne equally across society. Rather, they impact the poor disproportionately, which stunts the economic growth that can lift people out of poverty. While exploring the root causes of corruption, one participant reiterated the quote, “Monopoly + discretion + impunity – transparency = corruption,” while others gave examples of how corruption hinders their supply chains.

Key questions came to light in regards to the challenges of combating corruption and enacting systemic reforms to institutions and policies. For example, in some countries the shadow or informal economy is larger and more efficient than the formal one. When corruption chokes the formal economy, citizens find citizens find ways around it, which creates entrenched interests that benefit from the current system. Since corruption breeds corruption, changing the system can have prejudicial effects on poor people who survive in the shadow economy. Thus even people who would benefit from transparency end up resisting it.

Participants considered the powerful role of technology in bringing transparency to supply chains, improving relations with local governments and securing financial transactions. For example, online systems that replace face-to-face meetings when applying for permits or titles and paying for certain services cannot take bribes to expedite a process. Another example is how social media tools can both empower people through citizen reporting and hold people accountable for their actions. Participants noted, however, recent research has explored how globalization can actually increase corruption, making transparency more elusive.

All participants engaged around the central theme of business’s role in creating the democratic institutions that work. Participants recognized the powerful voice the private sector has in influencing media and government as well as going beyond compliance to drive change along value chains. This change could take the form of new codes of conduct or sector/region-specific initiatives that promote transparency.

Participants agreed that no one actor can tackle corruption on his/her own. Partnerships at the global and local levels between business, nonprofits and government show the most promise at enacting the systemic changes that produce good laws, and the grassroots support to comply with these laws. These democratic reforms, supported by sustainable and socially conscious business practices, can help influence a new incentive structure in which corruption is reduced.

Business leaders expressed earnest interest in partnering with Transparency International to facilitate more regional and sector-specific conversations. It is clear that Washington state companies exemplify what can be done to increase transparency in places suffering from the effects of corruption.