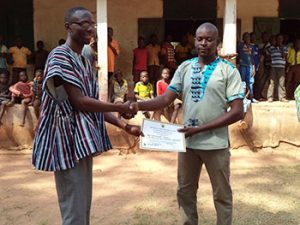 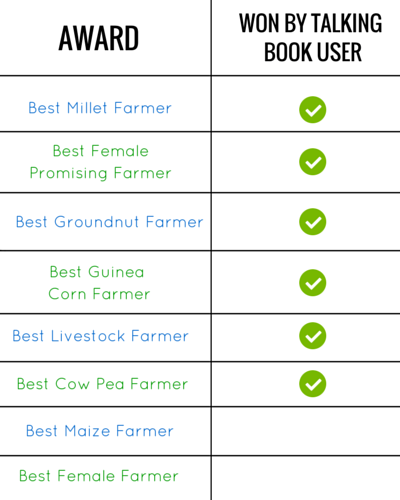 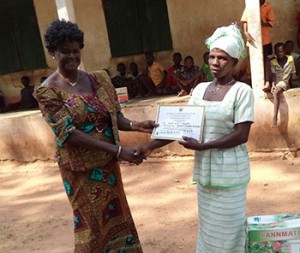 Mrs. Adjoa was acknowledged Best Cow Pea Farmer in the district. She received a certificate, farm inputs including cutlasses and knapsack, bars of soap, and clothes.

Mrs. Adjoa said the Talking Book not only helped her win this award but also delivered enough health messages on infant and maternal health which she is practicing to keep herself and children healthy. She lives in Deriyiri Zaguo, one of our program communities. 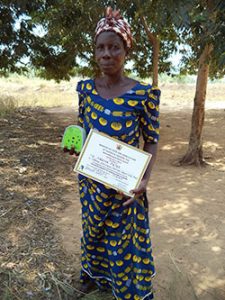 The best district female promising farmer went to Mrs. Abena Peter from Kanyani a section of Tugo Central. She received a certificate; knap sag, bars of soap, and other farm inputs.

“After listening to the Talking Book, I decided to sow my crops in lines including my maize and the agriculture officers said this was a good practice. I will always listen to the Talking Book any time I get to my house because the messages are helpful.” 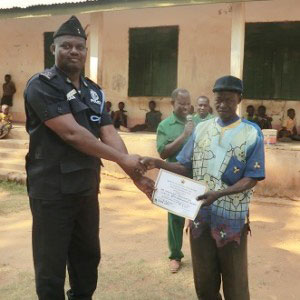 Groundnuts is the only cash crop produced in the Jirapa district. Farmers sell groundnuts to pay for their children’s education, enrollment in the National Health Insurance Scheme, and to meet other family needs. Prior to the Talking Book, farmers lacked the needed knowledge on the cultivation and storage of this crop. Many farmers’ groundnuts went bad before they could sell them, while others were forced to sell them immediately after harvest often at lower prices. Now, thanks to the Talking Book, farmers like Kaatigre are able to produce bountiful groundnut crops!

“The methods that our parents were using and those from the Talking Book are far different and I have taken your method of farming more serious than what my fathers were using. I can see that the messages you gave are different from our parents’ own that is why I have used this new method from the Talking Book to farm my groundnuts and I have gotten a lot. Now my name is mentioned here as best farmer.” 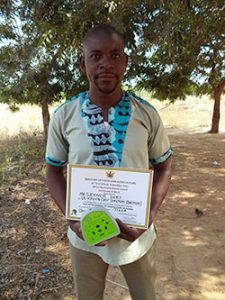 Kapaala (New Guinea corn) is a new variety of guinea corn with high yielding rate in the Upper West Region. Unfortunately many farmers have little knowledge about this crop and how to cultivate it. With knowledge from the Talking Book on good agricultural practices on kapaala production, Mr. Siekanye Dery from Ul-kpong won the district’s Best Cultivator of Kapaala award.

“I would not have won this prize without the Talking Book because I would have been using my old outmoded traditional methods. I would have been using mounds and wouldn’t have known that I should see the agriculture extension agents if I face any problem. The device advised that I should go to the Ministry of Food and Agriculture with any problem I face. This was what I did and won this prize.” 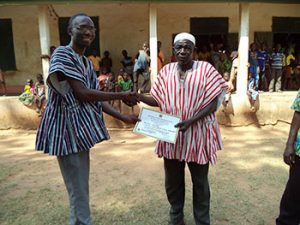 This award went to Mr. Ali Imoro from Lang-uolo. He received a certificate, clothes, bars of soap, salt lick, and other farm instruments. 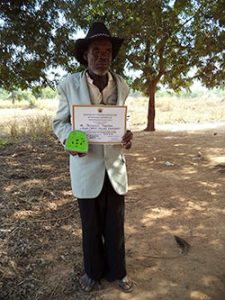 “The Talking Book has been educating us on good agriculture practices and how to make our own fertilizer called compost. I also learned how to keep my children healthy and the month to immunize or vaccinate my poultry.”

We are so proud of our communities’ farmers for winning awards at the 2014 Farmer’s Day! It is humbling to know our program is helping families put more food on their tables, send their children to school, and help pay for medical insurance. But in order to continually update Talking Books with critical lessons, we need your help. Please donate today so we can continue empowering families around the world.

Farmers in our communities use Talking Books to continue their learning of effective agriculture techniques and practices. Most households in our program cultivate one or more of the following crops: beans/cow pea, millet, maize, groundnuts (peanuts), and guinea corn/kapaala. These farmers also rear livestock such as goats, sheep, pigs, poultry, and cattle.

With these crops and livestock in mind, and thanks to a large percentage of funding coming from ARM, we are able to create messages with the Jirapa district agriculture development unit on better agricultural practices farmers need to know in cultivating these crops and rearing their livestock.

Knowledge on good agricultural practices is very vital to the rural farmer whose community is likely not to receive an agriculture extension agent throughout the year because of bad roads and accessibility. Talking Books are also extremely helpful to these farmers because they often cannot read or write, they lack grid electricity, and either have no access to radio or the community is out of radio coverage area.

Ghana started recognizing and celebrating its farmers in 1985. Since 1988, the first Friday in December has been set aside as a national holiday to honor deserving farmers at the community, district, regional and national levels.

Farmer’s Day is marked a national holiday because more than 60% of Ghanaians are subsistence farmers. Also 100% of Ghanaians in one way or another depend on these farmers for their food.

An important component of the day is the awards ceremony, which is held on the district, regional, and national levels. Judges who have followed farmers’ achievements throughout the year bestow prizes for excellence in such categories as husbandry practices, ecological awareness, use of new technology, and contributions to the local community.

A farmer’s activities are closely monitored and assessed by Agricultural Extension officers over the farming season and preliminary selections made at the District and Regional levels using the following criteria:

Scale of Operation:
Various scales of operation, small, medium and large are considered. Size and number of various enterprises identified in (i) above, e.g. acreage of crops, number of livestock and poultry, surface area of fishpond(s), number of beehives and the yield realized from these are used to classify scale of operation.

Knowledge of Husbandry Practices:
The farmer should be conversant with cultural practices such as fertilizer application, weed, pest and disease control as well as scientific animal production techniques.

Environmental Awareness and Relevant Practices:
An award winning farmer should be aware of the problems of the environment and the measures needed to be taken to alleviate their harmful effects. He/she should be aware of factors such as control of bush burning, soil erosion control and other soil and water management practices.

Identification of Farming Problems and Innovation:
A good farmer should be able to identify and evolve or institute measures to combat periodic or perennial problems connected with his/her farm project.

Records Keeping:
An aspirant award winning farmer should have adequate knowledge in farm record keeping that will assist him/her to evaluate the success or failure or the enterprise.

Adoption of New Technology:
The farmer should prove that he or she is abreast with innovations with regard to improved practices, inputs and techniques which will increase his/her agricultural productivity.

Farmer’s Role in his or her Community:
To be considered as an award winner, the farmer must contribute towards the growth of the community in which he or she lives. He or she should extend to, or share knowledge with other farmers in the community.

General Impression of Farmer and Farm:
The general outlook of the farmer and his farm is very important. The farmer should be able to identify general or specific problems connected with the farm and be aware of the institutions to consult for help.