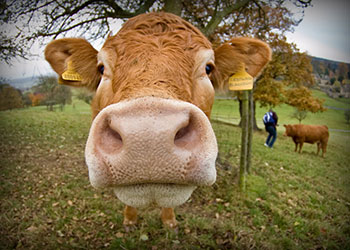 Dairy farmers who raise their cows on grass and legumes were once again shut out of the subsidies that go to non-organic dairies in the 2014 Farm Bill. That means organic milk will continue to cost more in the grocery store than its non-organic counterpart, however it may be worth the higher price.

GlobalWA member Washington State University recently completed a study which may make you think differently about the milk you’re drinking.

While there has been no shortage of news about omegas and essential fatty acids being good for the body, this latest study from WSU has revealed surprising new details. Along with proving that organic whole milk is in fact good for you, it contradicts earlier reports on dairy products having a negative effect on health, and it downplays the value of consuming reduced-fat dairy  products.

“Milk products are good sources of many nutrients, including several of concern in at least some U.S. population cohorts – calcium, potassium, vitamin D (in fortified milk products), vitamin B12, and protein1,” the study said.

How do these findings relate to the Farm Bill? Even in 2014, when people around the world are more educated about nutrition than ever before, the recently-passed Farm Bill only recognizes dairy subsidies in which corn, soybean meal and alfalfa hay are used to feed cows5. Large farms that use these grains to feed cows produce the kind of dairy that the WSU study shows to be inferior to organic dairy. Organic, grass-fed dairy farms already cannot compete with large scale dairy farms in the U.S. The Farm Bill still only recognizes traditional methods of dairy farming, which cuts millions in potential subsidy payments to organic farmers as a whole2.

The WSU study concludes that organic farming ultimately leads to better health.  Sadly, the U.S. still has not embraced non-industrial farming, and the latest Farm Bill only reinforces this. 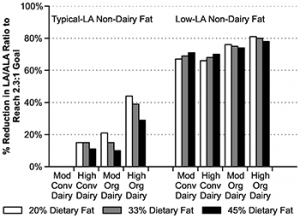 Research coming out of the United Kingdom last October was good news when it comes to sustainable organic dairy farming.  A study was published about a program called the ‘Sustainable organic and low-input dairying’ (SOLID) project led by Prof. Nigel David Scollan and a team of academics, supply chain members and farmers working to make low-input dairy farming competitive in the European market. The plan includes finding animal breeds that do well with an organic and low-input system and strategizing better feeding techniques.

Interest in organic dairy in China is on the rise as well, at farms such as the Green Yard3, which quotes higher prices than in the U.S., but for lack of dairy farming land. This means that if the U.S. did adopt a national policy of organic dairy farming, it could have a competitive edge. This could lead to increases in U.S. dairy product exports.

“The fact that most organic markets and consumers are in developed countries and are prepared to pay a premium for organic products makes organic farming a niche area with excellent prospects for exports,” according to a study in the journal Scientific and Technical Review of the Office International des Epizooties (Paris)4”.