GLOBALWA.org / Members In The News / IN PERSON Questions For: Bookda Gheisar Executive Director Of Global Washington

After spending more than two decades working on urban Seattle issues with Social Justice Fund Northwest, grassroots fundraiser and nonprofit guru Bookda Gheisar took on a global challenge. As executive director of Global Washington, a member association for the state’s growing global health and development sector, she’s had to lead the new group during an economic downturn and a period when international aid faces enormous challenges in conflict and disaster zones.

Do you sense a competition between local and global nonprofit movements in the Seattle area? Because of the tough economy over the last few years, a lot of my colleagues and friends in the nonprofit sector can think that there is a competition. We feel like there is only so much; there is only so much of the pie that is available to us and we have to compete for that. But I really believe in a different way of thinking (other) than that scarcity mentality.

You previously worked for Social Justice Fund Northwest — how has it been to shift your focus from local to global? Over the last few years, I feel like the separation between local and global has become a lot smaller, the gap has closed, so we are more and more people of the world. And I just hear less and less people asking questions (like) “Well, should I do something locally or should I do something globally?” Because more and more of us understand that we’re interconnected as human beings. 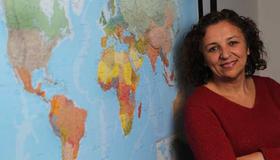 Global Washington has an upcoming conference, Opportunities and Obstacles in Turbulent Times, on Oct. 31 and Nov. 1 in Redmond. Why you are looking at the challenges of delivering aid in conflict and disaster zones? In the last 10 years, we’ve seen more and more turbulence: political, economic, social (and) environmental turbulence. Now we’re living in an environment, we’re living in a world, where we’re in a constant state of turbulence and crisis, some very positive, some very negative. And the international development community is having to adapt and adjust and change every day based on the earthquake in Haiti, the famine in Somalia, the poitical uprising in Egypt. So our conference is about a time to come together to look at the opportunities and interesting innovations that’s come out of these last few years. What are we doing that’s working, and how can we learn from each other moving forward?

Is there a move toward micro-philanthropy that’s a better way to engage the community? When you have a donor who gives $200,000 and they change their mind and they want to move on, you feel a tremendous impact. When you have 1,000 donors who give $1,000 each, and one of them wants to leave — all of your eggs are not in one basket. You have a broad base of support. People care about your work. They’re committed; they’re mobilized. And sometimes people change their minds, which they should, and your livelihood is not dependent on it.

How has the economy impacted nonprofits’ efforts overseas? One of the panels at the conference is focusing on new ways of fundraising. I think that the economy has made all of us think a lot more about relationship building, community organizing, building a broad base of support: hundreds of donors who give out $100 each, as opposed to really all of us searching for people who give their really major gifts. That’s one thing I see happening. We’re seeing more and more nonprofit/for-profit hybrids. That’s a completely new trend in this sector of nonprofits — for nonprofits to start thinking about combining the two and coming up with a new model is groundbreaking, and I love seeing that.