When more than 800,000 Afghans are severely disabled, it’s easy to see why there’s a drastic need for schools, hospitals, government buildings and places of worship to be made accessible to them.

But people with disabilities in Afghanistan have suffered from a nearly universal lack of access to these and other important buildings and facilities. The Afghanistan Central Office of Statistics has estimated that 98 percent of all buildings cannot be entered by wheelchair.

This past year, Clear Path International launched a pilot project to alter this situation by constructing high-quality ramps at key locations throughout the country applying best practices established in the industry. Clear Path is a nonprofit organization that assists victims of landmines and other explosives, and others disabled or displaced by armed conflict in Southeast Asia and Afghanistan.

Not only are the projects performing a critical service for this vulnerable segment of Afghanistan’s population, they also are helping to establish good will between the United States and Afghan leaders at a time when that relationship has been severely stressed. CPI programs in Afghanistan are funded by the U.S. Department of State Weapons Removal and Abatement (WRA).

“We’ve had two different reports that the Ulema (Council of Mullahs and Imams in Afghanistan) has specifically mentioned the work of CPI at the Eid Gah Mosque, as well as commented positively in general on the role of Americans bringing accessibility changes at this very high-profile religious site,” said CPI Program Manager Matthew Rodieck. “One of the leaders of the Ulema, a double-amputee martyr and former Mujahedin commander, was especially complimentary.”

Eid Gah Mosque in Kabul is one of the highest profile mosques in Afghanistan and is where VIPs regularly worship and hold funeral prayers of martyrs. CPI through its Afghan partner organization, Accessibility Organization for Afghan Disabled (AOAD), built three ramps complete with handrails. In Kabul, CPI and AOAD also constructed three ramps at the Antoni Infectious Disease Hospital, an important referral site for tertiary care and the only facility of its kind in the country.

In Kapisa Province, north of Kabul, Afghan Amputee Bicyclists for Rehabilitation and Recreation (AABRAR) developed and implemented access ramps at several diverse sites. These included the main mosque of the capital city, which became the only physically accessible mosque in the entire province, the Ministry of Information and Culture, and the Ministry of Education. Several public schools throughout the rural community were also ramp sites in the AABRAR project, each selected based on feedback from local authorities about their priorities.

In Balkh Province, in the north of Afghanistan, Afghan Landmine Survivor Organization (ALSO) constructed access ramps at several educational settings across Mazar-i Sharif, the main city of Balkh. The sites selected included co-educational elementary schools, boys’ high schools, girls’ high schools, and the Balkh University making it one of the few institutions of higher learning in the entire country with accessible buildings.

Going forward, CPI hopes to build nearly 600 ramps at 350 sites throughout Afghanistan. The $660,000 project funded by WRA will involve the same three partner organizations. A key component of the ramp project is to raise awareness of the rights of people with disabilities, said Rodieck. “Awareness is quite low; there’s not much sensitivity.”

That awareness campaign also will make its way into the classroom at Kabul Technical University’s Engineering School where CPI hopes it will result in some practical solutions. “We want to engage the entire faculty on physical accessibility design,” Rodieck said. “We want to advocate on a more institutional level that the curriculum become more realistic.”

For more information about this project, contact Matthew Rocieck at matthew@cpi.org. 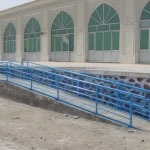