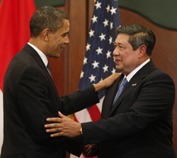 Should Haiti be made a UN protectorate?   Some say that is the best option for this country whose governance is shaky in the best of times, while others are concerned about taking away its autonomy.  Read the debate at a Brookings event here.

Integrating the three D’s: Former USAID Administrator J Brian Atwood spells out how to elevate development assistance in US foreign policy, and what the challenges will be for diplomats, defense personnel, and development professionals.

With the release of initial findings from the State Department’s Quadrennial Diplomacy and Development Review (QDDR) expected very soon, MFAN has launched a blog series to spur debate on the review and its importance to foreign assistance reform and the future of U.S. development efforts.  The first post – “Time for Hard Questions on the QDDR” by George Ingram – poses candid questions to keep in mind as we read and respond to the release of the initial QDDR findings.  George’s piece will be followed by material from others across the Network on the QDDR, the Presidential Study Directive on Global Development Policy, USAID, country ownership, gender integration, and other reform-related topics.

President Obama makes symbolic visit to Indonesia
Often described as the most important country in the world that people know the least about, Indonesia welcomed a visit by President Obama. Many feel it is the beginning to placing the country on the map. Furthermore, the “Comprehensive Partnership” that the two countries will formally launch represents the kind of long-term commitment that can go far in helping Indonesia pull its weight in global affairs.

Indonesia urges US to reconsider ban on commando training
Indonesia’s special forces have concentrated on counterinsurgency issues in recent years, but were accused of major abuses in the former Indonesian province of East Timor in the ’90s. As a result, several countries, including the U.S. and Australia, suspended joint military training in Indonesia. The Indonesian Foreign Minister Marty Natalegawa expressed hope that full military cooperation between the two countries could resume. The issue is likely to feature in talks between President Barack Obama and his Indonesian counterpart, Susilo Bambang Yudhoyono, next week in Jakarta.

The Overseas Development Institute launched a report on the key recommendations for ‘fragile states’
The meeting series on Development, Security and Transitions in Fragile States, organised by the Overseas Development Institute (ODI) in partnership with the Dutch Ministry of Foreign Affairs, brought together an impressive array of experienced and respected politicians, analysts, policymakers and researchers from a vast range of disciplines and background. The speakers discussed the nature of fragility, relationships between development and security, and the challenges of supporting transitional and state building processes.

New aid program challenges traditional development community’s beliefs about poor people’s ability to make wise use of cash
Oxfam Great Britain’s “unconditional cash transfers” are cash payments with no conditions other than that it couldn’t be used for alcohol, drugs or gambling. Oxfam’s reviews of the program found that families had used the money to improve their household food security and overall income, School dropout rates decreased, and gender equity in the village improved, with women sharing control of the money.

Former Air Force sergeant asserts foreign development aid is critical to our national security strategy
Will Bennett, former Air Force technical sergeant, spent 12 years engaged in supporting peacekeeping and wartime missions in Bosnia, Kosovo and Iraq. He says despite many tough budget choices ahead it is imperative that Congress maintain U.S. investments in foreign development not only to help prevent vulnerable regions around the world from descending into strife but also to make the American public safer.