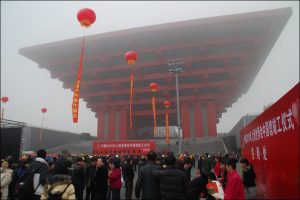 The World Expo in Shanghai is “the Olympic Games of economics, culture and technology”

China’s Expo pavilion opens to the world
China welcomed international visitors as it marked the completion of the China pavilion for the 2010 World Expo in Shanghai.

Middle class protestors march over World Expo threat to Shanghai homes
Almost 1,000 people in Shanghai have marched furiously on Beijing to protest against being thrown out of their homes ahead of the World Expo.

China warns Obama not to meet Dalai Lama
China has warned that ties with the US would be undermined if US President Barack Obama met the Dalai Lama.

Yemen Aid Efforts Suffer Funding Shortage
Lack of funding is hampering United Nations aid efforts for some 250,000 internally displaced Yemenis. The U.N. Refugee Agency has received only 3 percent of its USD35.6 million appeal, while the World Food Program already took a loan of USD4 million from its own resources to support its Yemen programs.

US Helps Create Jobs in Pakistan
The U.S. Agency for International Development is helping create employment opportunities in Pakistan, as it forged a memorandum of understanding with Motorola Pakistan, Sarhad University and Techaccess. The initiative, Daily Times reports, is expected to generate more than 100 job opportunities in the next four years.

World Bank Lauds Switzerland Effort to Return Haiti Stolen Assets
The World Bank has commended the efforts of Switzerland to return to Haiti millions of dollars worth of stolen assets held by the family of former dictator Jean-Claude Duvalier in Swiss banks. It said the money could be used for post-earthquake reconstruction projects and development programs.

Bill Clinton Vows to Speed Up Haiti Aid Delivery
Former U.S. President Bill Clinton has vowed to expedite aid delivery to quake victims in Haiti as the international community scrambled to provide food and shelter to an estimated 1 million people in need of relief in the devastated nation. On a visit to Port-au-Prince Feb. 6, the newly appointed international aid coordinator for Haiti also apologized for delays in bringing help to those in need.

EAC, Microsoft Partner for East Africa Digital Development
The East African Community and Microsoft Corp. have inked a deal for the development of digital technology in East Africa, IT News Africa reports. Under the agreement, Microsoft will assist EAC in exploring how information and communication technology can help address the region’s most pressing development challenges.

Starbucks Helps Fight AIDS in Africa
International coffee chain Starbucks launched its All-You-Need-is-Love campaign that seeks to mobilize funding for combating AIDS in Africa, according to Aid Watch. The coffee giant gives a portion of its sales to the Global Fund to Fight AIDS, Tuberculosis and Malaria.

Violence Deters Humanitarian Operations in Congo, UN Says
The United Nations has warned that armed attacks at refugee camps in Congo are interrupting humanitarian operations there, UPI reports. The attack, which killed three people, sought to recruit men to the Rwandan Hutu rebel group. There are about 1.3 million internally displaced people in Congo’s conflict-ravaged Kivu provinces.

New MCC chief Daniel Johannes discusses plans for 2010 in an interview with devex.

At least 55 countries have submitted climate mitigation plans, in compliance with the Copenhagen Accord.
23 of these are developing countries, including China, which said it would “endeavor to lower its CO2 emmissions per unit of GDP by 40 to 45 percent.”

Senator Lugar in a speech to the Society for International Development,
discussed the need for a “unity of purpose,” where the whole government works together on development outcomes.  This is an important step towards better coordination of U.S. foreign aid policy.

Drop in U.S. aid hits democracy efforts in Ukraine.
Declining U.S. financial support poses threats to Ukraine’s fledgling democracy, The Washington Post reports. The drop in aid has prompted independent Ukrainian exit poll groups to decrease the number of districts they cover, leading to survey results that are at variance with other surveys. The decline, according to the newspaper, can be attributed to “Ukraine fatigue” or the increasing intolerance of the West with political infighting in the former Soviet republic.