GLOBALWA.org / Our Blog / Coping with Climate Change in Copenhagen

Coping with Climate Change in Copenhagen 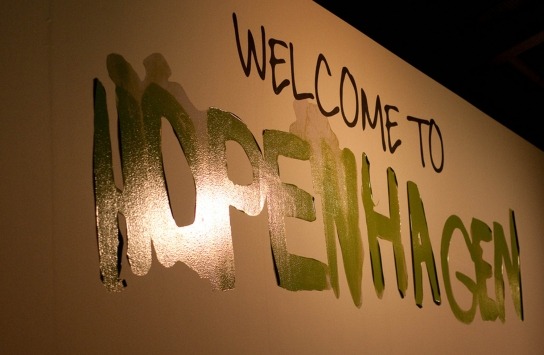 The Climate Summit in Copenhagen is on our minds this week.  The big question: by how much will we agree to reduce emissions?  And how much funding will we commit to give to developing countries to help them adjust to climate change and avoid climate-busting energy use as their economies grow?  So far, the United States has proposed cutting emissions by 3 to 4 percent of 1990 levels by 2020, whereas the European Union has agreed to a 20 percent cut.  Neither is considered sufficient, but at the rate the negotiations have been going, we might be lucky to have any deal at all.  The COP15 has been full of the usual ups and downs of any multilateral negotiating process- complete with walkouts, accusations, and really boring speeches that say nothing new (see Washington Post article).   Officials hope to have a deal by this Friday, but many observers fear that failure is looming.

Some environmental organizations are concerned that the big polluters of the world are not going to agree to reduce emissions by enough, and that the summit will not achieve anything big enough to have a significant impact on climate change.    There is also concern about a great “greenwash” – where no matter how lackluster the outcome of the summit, all the publicity will gush about whatever small thing was accomplished no matter how insignificant.

The EU has offered $3 billion per year over 3 years to help developing countries cope with climate change.  Experts disagree about whether this amount will have any impact, and what a sufficient amount would be.

Global Washington member Mercy Corps is one of the many NGOs represented in Copenhagen.  From the perspective of Jim Jarvie on the Mercy Corps blog,  it sounds like the ultimate climate change conference is taking place on the sidelines of the negotiations, with presentations and discussions led by NGOs and government agencies from around the world.  Dory McIntosh writes about the peaks and troughs of the conference, especially the dismal predictions laid out by Al Gore and scientists about the effects of global climate change:  “Not only are the Greenland ice cap and Western Antarctica melting far faster than was previously thought, but the Himalayan glaciers are melting at a rate that is placing the lives of more than a billion people in jeopardy. Sea level rises of around one meter are predicted by the end of the century, which would displace an estimated 100 million people from their homes and livelihoods.”

Eco-Encore is a Seattle organization throwing its support behind the goals of the summit.  It has organized a media recycling drive to benefit 15 northwest environmental organizations, in conjunction with COP15.

Need more background?  The Seattle Times has a good quickie background piece on the talks.

thanks to Darren Nowels for help with research on this post