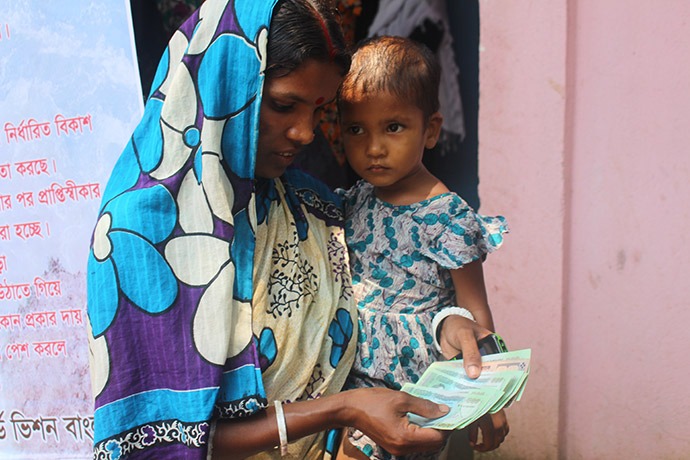 Humanitarians have begun to acknowledge a painful reality: There are more people in critical need globally than we can reach. That is, if we stick to business as usual in emergency response.

According to the UN Refugee Agency, “An unprecedented 65.6 million people around the world have been forced from home.” Layer on slow onset disasters like the hunger crises that have been building in Yemen and Eastern Africa, and add in sporadic natural disasters – earthquakes, tsunamis, hurricanes, floods, landslides – and you have a global response community stretched almost to the breaking point.

Giving cash directly to people in emergencies is one solution to the growing gap between humanitarian needs and capacity. In fact, research over the last decade has proven this method of aid delivery to be not only cheaper than traditional in-kind aid, but also incredibly effective at alleviating suffering.

A paper jointly authored by the Overseas Development Institute and the Center for Global Development two years ago extolls the benefit of cash-based humanitarian aid where appropriate. In addition to reducing the cost of providing aid, giving cash instead of stuff increases the speed of the response, improves transparency, and enables recipients to purchase exactly what they need when they need it most. And it has the added benefit of supporting local economies and businesses.

To be sure, giving cash is no panacea. Where markets aren’t functioning, and where broader systemic needs are lacking, traditional aid responses are still necessary.

Only about 6 percent of all humanitarian aid is cash-based today, but that figure is growing. Further, cash aid is increasingly going digital, and this presents an opportunity to solve yet another challenge associated with poverty: financial exclusion.

While they may not have access to financial services, nearly 80 percent of adults in emerging economies have something else – a mobile phone. Foundations like The Bill and Melinda Gates Foundation and aid organizations like Mercy Corps are increasingly exploring ways to turn cash-based aid into an on-ramp to wider financial inclusion for the poor.

The following Global Washington members are currently providing cash-based emergency aid globally, whether in the form of physical cash and vouchers, or as mobile money and electronic vouchers:

The Bill & Melinda Gates Foundation’s Financial Services for the Poor program aims to play a catalytic role in broadening the reach of robust, open, and low-cost digital payment systems, particularly in poor and rural areas—and expanding the range of services available on these platforms. Their approach includes three objectives: Increasing poor people’s capacity to weather financial shocks and capture income-generating opportunities; generating economy-wide efficiencies by digitally connecting large numbers of poor and low-income people to one another and to financial services providers, government services, and businesses; and reducing the amount of time and money that poor people must spend to conduct financial transactions.

Over the last decade, Mercy Corps has implemented cash programming in 31 countries including Syria, Ukraine, Haiti, Niger, Yemen and Uganda. Mercy Corps was the first organization to pilot cash-for-work in Afghanistan and in response to the Indian Ocean Tsunami in 2004.  Since July 2016, the organization has distributed over $46 million dollars in cash programming — benefiting more than 173,000 households. In 2017, Mercy Corps connected more than 1 million people to cash during emergencies, infusing more than $46 million into local economies around the world.

When disaster strikes, people living in the affected communities often lose the assets and income they need to keep their families fed, sheltered, and clothed. Distributions of cash can help disaster-affected families meet the complex needs that arise. For Oxfam, it’s a means to empower people and give them some control over their own destiny at a time of great uncertainty. Both in Oxfam’s humanitarian response programs, and in its advocacy to change government policy, cash programming is one of the central ways of supporting food security and livelihoods in an emergency context. Oxfam will continue to promote a “cash first” approach, so long as it is backed up by sufficient analysis of the market, wider context, and utilizes a well-honed information communication technologies capacity – and where it is not appropriate, Oxfam will utilize other modalities, including in-kind support.

During the 2011-2012 Horn of Africa famine, World Concern provided families with vouchers for food and other items, but they have since found cash to be more efficient and useful for beneficiaries during a disaster or crisis. The organization is distributing cash grants of approximately $80 to families in Somalia affected by the current drought crisis. Families are using the cash to purchase food and supplies to survive. In addition, in 2016 World Concern provided cash to families in Haiti affected by Hurricane Matthew.

Cash-based programming is an increasingly important tool for tackling the underlying causes of poverty. World Vision recognizes that using cash strengthens local markets; restores dignity and choice to people who are in need; and can provide efficient, tailored help to families. In 2016, the World Vision International CEO committed to providing 50% of the organization’s humanitarian assistance through cash by 2020.