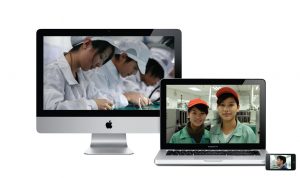 Apple details labor violations at its suppliers. Refer to article below. Photo courtesy of Apple Inc.

Don’t miss the hearing on USAID and the FY2011 Budget Request this Wednesday, March 3rd, which will be webcast from the committee website.

The richest donor countries are not meeting the commitment made collectively at Gleneagles in 2005: to deliver $130 billion in aid by 2010.  But aid has increased “remarkably,” according to Brookings, and the international commitment made 5 years ago to deliver more aid has helped.

See the OECD forecast of aid in 2010 – some countries will surpass their individual Gleneagles commitments in 2010, including Sweden, Denmark, Spain, and the UK.  Among others, France and Germany will fall short.  The United States made a less ambitious commitment to double aid to Africa, which it will reach in 2010.

Author Nicholas Kristof argues that “if secular liberals can give up some of their snootiness, and if evangelicals can retire some of their sanctimony, then we all might succeed together in making greater progress against common enemies of humanity, like illiteracy, human trafficking and maternal mortality.”

The Washington Fair Trade Coalition reports: As earthquakes continue to devastate the people of Haiti, many people are learning for the first time how this country has been politically and economically exploited for centuries. The people of Haiti have come to recognize that working in sweatshop factories for Disney and the Gap is not the way to develop their country and education their children.

Apple Inc. outlined in a company report on audits of 102 supplier facilities conducted in 2009 said it found more than a dozen serious violations of labor laws or Apple’s own rules at its suppliers that needed immediate correction.
Click here for Apple’s 2010 Supplier Responsibility progress report.

Do you know of any products being made overseas with child labor or forced labor?  Report it to the US Department of Labor by April 9th for inclusion in their report to Congress and the President. http://www.dol.gov/opa/media/press/ilab/ILAB20100134.htm

For statistics on labor and violations visit: http://www.ilo.org/global/lang–en/index.htm

The Wall Street Journal labels their interviewees of prominent philanthropists and charity executives “philanthrocapitalists,” leaders in the worlds of business and finance, who are looking to apply the same zeal to donating money as to making it.

South African researchers claim treating tuberculosis and the AIDS virus simultaneously saves more than twice as many lives compared with attacking TB first. Dual treatment pays off with a 56 percent reduction in deaths from all causes, the large South African study published in the New England Journal of Medicine showed.

A Swedish entrepreneur is trying to market and sell a biodegradable plastic bag that acts as a single-use toilet for urban slums in the developing world. The entrepreneur successfully tested the bags in Kenya and India and says he plans to mass produce the bag this summer, selling them for two to three pennies each, comparable to the price of a plastic bag. According to UN figures, about 40 percent of the earth’s population does not have access to a toilet, which contributes to 1.5 million children worldwide who die yearly, largely because of poor sanitation and hygiene.

“The responsibility for the current difficulties in China- U.S. relations goes completely to the U.S. side”
http://www.businessweek.com/news/2010-03-02/china-says-u-s-entirely-to-blame-for-strained-ties-update1-.html

Does financial innovation boost economic growth?  Ross Levine argues yes, and Joseph Stiglitz  argues no.  Read, vote, and contribute to the lively debate at the economist.com.

The Doha talks remain deadlocked and many countries blame the United States. The United States countered criticism by calling for better offers from advanced developing countries in service sectors such as finance, information and communication technology, distribution, and energy.