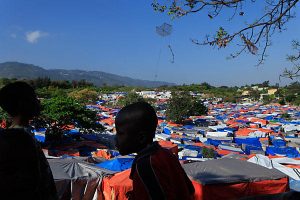 A makeshift camp for earthquake survivors in Port-au-Prince

United States Will Take a New Approach to Aid in Haiti
Secretary Clinton is expected to outline plans for an additional $1 billion in aid to Haiti at the upcoming UN donor conference.  U.S. assistance to Haiti will have one dramatic difference over past aid: this time, U.S. officials plan to work through the Haitian government, rather than around it.  They have plans to implement major aid projects through the government while building its capacity, instead of working mainly through local NGOs and other groups.  This new approach may increase local ownership and government accountability in Haiti.

Donor Countries Will Meet at the UN in New York to discuss decentralization as a Key to Haiti’s Recovery
World leaders at Wednesday’s UN conference on Haiti will be looking at a new focus on decentralizing Port-au-Prince in hopes of fulfilling long-terms needs after immediate needs are met.  They plan to look beyond basic relief and discuss not just how to rebuild, but how to build a better functioning Haiti.  The idea of decentralizating power in Port-au-Prince is a strategy that will be considered for a more stable Haiti.

Where is the QDDR?
The State Department was supposed to release the initial findings from its strategic review on development, known as the quadrennial diplomacy and development review (QDDR), sometime in March.  But now the release is set for “early April,” though there won’t be a public release until after a round of congressional briefings.  This is not the first time the QDDR’s release of initial findings has been set back, and there is no guarantee that we will see anything from the State Department in the month of April.  Unfortunately, this slows down the whole foreign aid reform process, as other reform efforts underway, such as the White House review (the PSD-7) and legislation in Congress (the Kerry/Lugar bill) are on hold until the QDDR findings are out.

New Online Tool Aims to Comprehensively Track Global Aid
A new online information portal on aid aims to improve transparency and prevent misuse of billions of dollars in international aid.  The tool, AidData, pulls together facts and figures from existing databases, donors’ documents, and other online resources.  About 837,000 projects are currently listed on the database, which reports official development aid as well as loans.  The tool gives more details about each project and provides information on new sectors such as funds provided by 36 under-reported bilateral and multilateral donors.  The goal for the project is to give donor and recipient governments, civil society organizations, beneficiaries, aid experts and the general public a fuller picture on who is funding what globally.  Founders of AidData include the Bill & Melinda Gates Foundation.

New Study on the Costs and Benefits of Duty-Free, Quota-Free Market Access for Poor Countries
The Center for Global Development released a new study on the costs and benefits of providing full market access for least-developed countries.  The study finds that Malawi and Cambodia would benefit the most under most scenarios, and most African LDCs would make small gains.  The only African country to suffer from preference erosion would be Madagascar- surprisingly, Mauritius, South Africa, and Central America show small gains even though they would not directly benefit from this market access.

USAID Announces New Global TB Strategy
USAID Administrator Rajiv Shah declares a new strategy to fight tuberculosis on a worldwide scale. In accordance with the President’s Global Health Initiative, USAID is accelerating their programs to control TB. Their goal is to halve the number of TB cases and deaths by 2015.  In support of these global targets, USAID released the U.S. Government’s Global TB Strategy that describes their blueprint for expanded treatment and control over the next five years.

The International Monetary Fund Has Traded its Dogmatism for Pragmatism
After six decades of zealously promoting free market economic policies, the International Monetary Fund has changed its view on international trade and development.  For years, governments that dared to challenge the IMF model found themselves out of favor in Washington and other Western capitals. But the financial crisis that swept the planet in 2008 prompted a new debate over free market policies and IMF ideology.  Now, in a notable turnaround, the IMF has acknowledged that in some instances, developing countries might benefit from controlling how much foreign capital enters their economies — and how it’s used. The new IMF view is summarized in an official paper published last month, “Capital Inflows: The Role of Controls.”

A New Strategy to Stimulate Africa’s Development
Many investors are afraid of doing business in Africa because of high political risks. This is where the African Trade Insurance Agency (ATI) comes into play with a unique strategy to stimulate development through trade and investment by reducing political and credit risk..  The ATI is Africa’s only multilateral political risk and credit risk insurance agency.  To join, African countries must sign a participation agreement and subscribe for at least 75 shares, each valued at $100,000. Member states are on the hook for any action or inaction that results in ATI paying claims.  Since 2004, ATIhas managed to secure $1.9 billion in investments across its member states, which includes the Democratic Republic of Congo, Kenya, Malawi, Rwanda, Uganda, and others. For more details on ATI please click here.

Tunisian Authorities Try to Gag Human Rights Watch’s Report
Human Rights Watch accused Tunisian authorities of using police to prevent journalists from attending the organization’s launch event for a report that criticizes the government’s human rights record.  A HRW employee said police had surrounded the lawyer’s office where the group was trying to brief reporters about its new report, which accuses Tunisia of adopting repressive measures toward former prisoners.  Tunisia, which attracts large sums in investment from EU countries, wants the European Union to grant it “advanced status,” which could give it preferential trade terms. However, diplomats say concerns about Tunisian’s human rights record risk complicating the application.