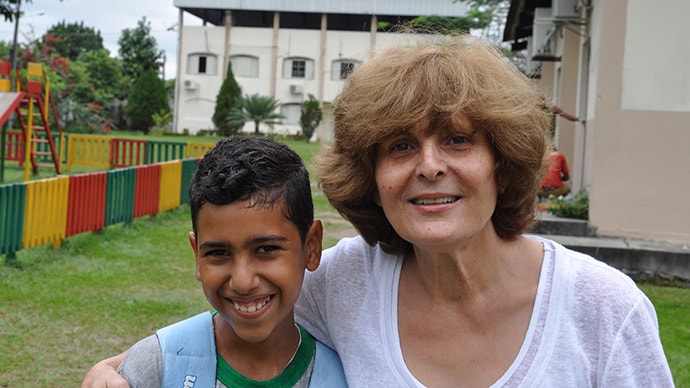 Mahnaz Javid poses with a student at The Association for Cohesive Development of the Amazon (ADCAM), located in Manaus, the capital city of the State of Amazonas, Brazil. Since 2006, Mona Foundation has supported the project with scholarships and funds for capital improvement. Photo provided by Mahnaz Javid.

“Mahnaz, do not forget”

An unforgettable cab ride at a young age became a defining moment in the life of Mahnaz Javid. Growing up in Tehran, the capitol of Iran, Javid had what she described as a comfortable childhood in a “regular middle-class family.”

“When I was 12 years old, I was restless! So, my mother decided, as a way of managing my energy, to take me for a cab ride,” Javid explains. “So, we left the nice tree-lined streets of our block towards the southern part of the city, where I knew, even at that time, that this was where the poor people lived. It’s where the slums were.”